Towering 3000 metres over the eastern regency of Karangasem in Bali, Mount Agung dominates the landscape. However, this is not just an incredible sight to see, but also the most important landmark in Balinese Hinduism. If you’re visiting East Bali, you’ll definitely want to visit Bali’s ‘Mother Temple’ on the slopes of the volcano and also find a viewpoint to really appreciate the beauty of the mountain.

Why is Mount Agung so important to the Balinese people? 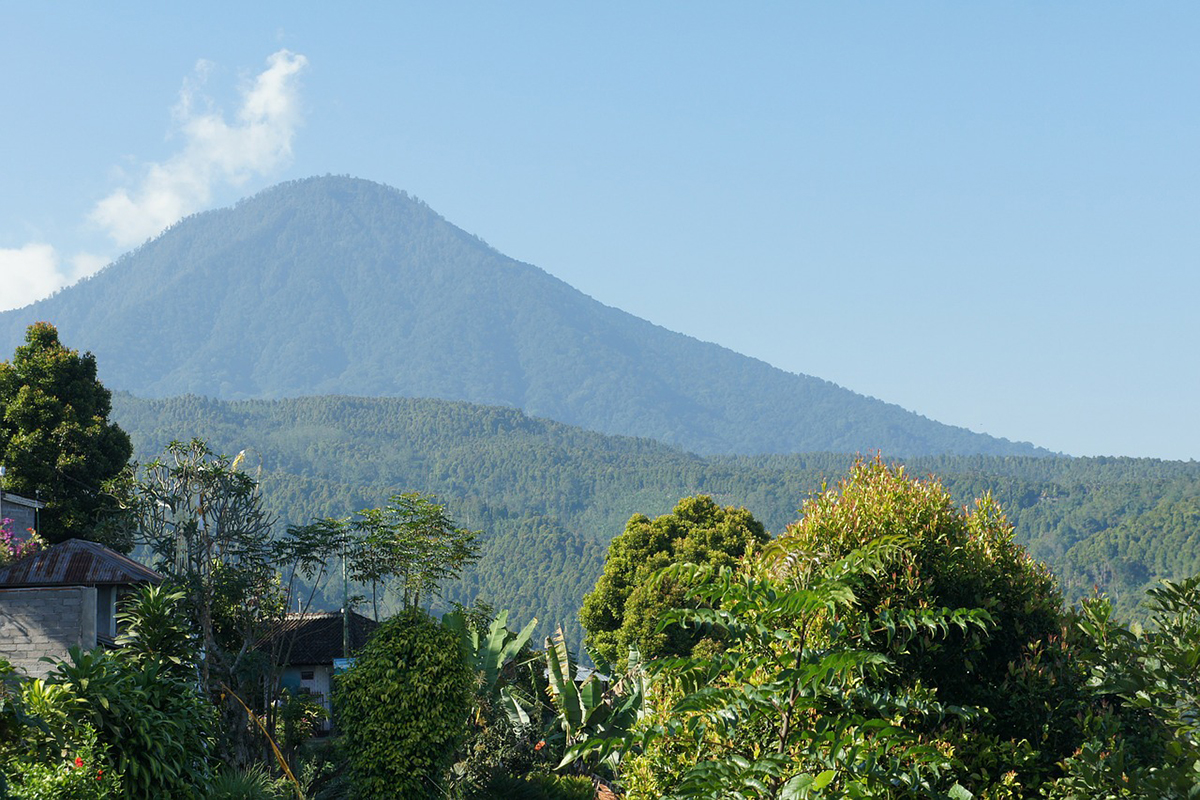 Balinese myths say that Mount Agung was born from a fragment of the holy Mountain Meru, which was thought to be the connection between heaven and earth. The islands of Java, Bali, and Lombok were all thought to have been given a fragment of the mountain to stabilise them spiritually.

There are also a couple of other reasons why the Balinese regard Mount Agung as the central axis of the universe. It is believed that the mountains are the dwellings of the gods and that Mahadewa, the highest manifestation of Lord Shiva, lives in Mount Agung.

They also believe that the flow of water from north to south, or kaja and kelod, is at its purest at its source and the most chaotic the closer to the sea it gets. Therefore, everything in Balinese life is oriented according to the kaja-kelod axis. Buildings, temples, prayer and even the way the head should points when they sleep is planned according to this. 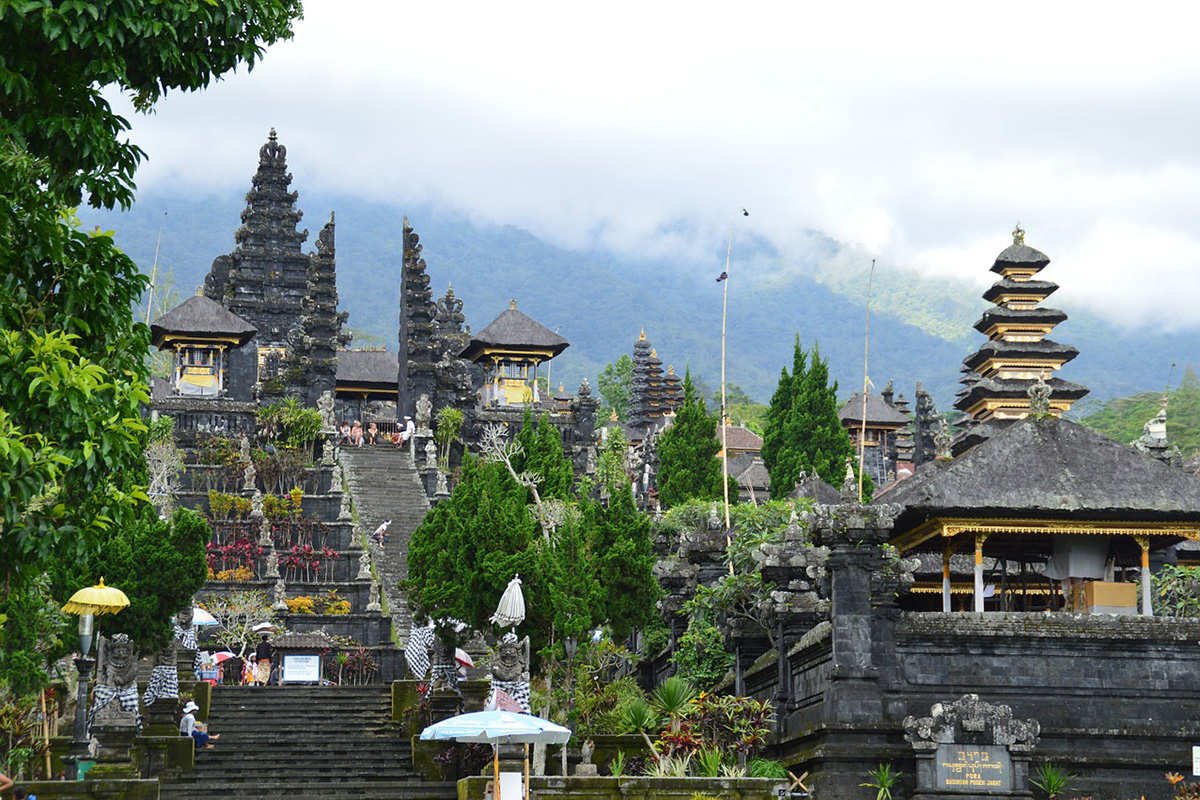 While you are staying at Lotus Bungalows Candidasa, it is definitely worth asking to book a driver to take you to Bali’s Mother Temple, Besakih. It’s just under an hour’s drive from the hotel 1000 metres up the western slopes of the mountain.

Although there is no way to know exactly how long there has been a temple at this site, it almost certainly dates from prehistoric times. Several of the temples have remains of structures resembling megalithic stepped pyramids that are at least 2000 years old. Over time the temple, which was at first named Basuki after the dragon deity ‘Naga Besukian’, believed to inhabit the volcano, became ‘Besakih’.

Tourists are welcome to explore Besakih but there are certain areas reserved only for prayers where you won’t be able to enter. To go to Besakih you will need to wear a sarong and sash and also have your shoulders covered. 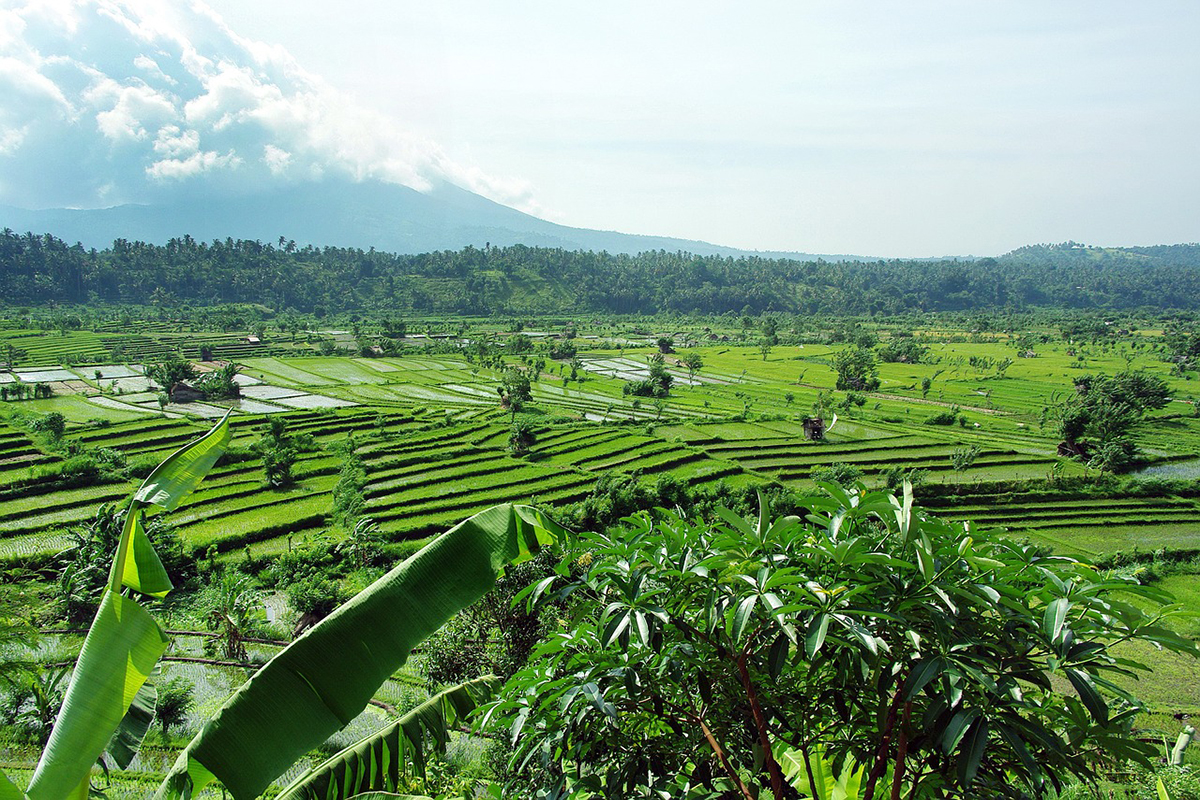 Bali is famous for its stunning rice terraces, and next to Tabanan Regency, East Bali has some of the highest yields of rice on the island. There are a number of reasons rice grows so well in Bali, but one of the most important is the volcanic soil. Volcanic soil is very rich in iron, magnesium, calcium, potassium, sulphur, silicon, and sodium, which are all important elements for plant growth. Combined with the amount of rain and warmth Bali gets, Balinese farmers can enjoy 2 or 3 crops of rice per year. It may be that rice farming is less important now than it has been historically in Bali, but it is still a huge part of the culture.

Mount Agung may not be talked about often but it is definitely central to daily life, religion, and culture in Bali. At the time of publishing it is not permitted to climb Mount Agung due to it being active, but you can view it from many places in East Bali and of course also visit Besakih. If you’d like to know more or find out how to book a tour, leave us a comment in the box below.