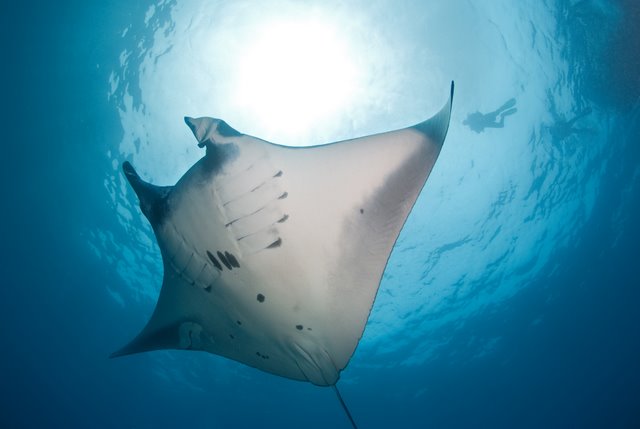 One of Bali's greatest charms is its wide range and variety of dive sites. You can dive in Bali on a steel shipwreck, over sand slopes, off vertical drop-offs, along deep coral covered ridges, in roaring currents, with manta rays, sharks or small nudibranches in many colours. In short, there's diving for all.

Amuk Bay, with the villages of Padang Bai in the south and Candidasa in the north, is about 6 kilometres across. Close to Candidasa there are two larger islands, Tepekong and Biaha, as well as an area with small rocks called Mimpang or Batu Tiga. The diving in this area is astonishingly rich.

This is a small beach northeast of Padang Bai. You start the dive on a sandy slope and continue on to a large wall and several large coral outcrops, or bommies. There are always small animals such as Nudibranch and flatworms here, and Frogfish, Leaf Scorpion fish and Ribbon Eels can be seen as well.
Night dives are excellent in Blue Lagoon. The dive site offers two different zones for diving - the sandy slope and the large coral blocks - each with distinctive animals living there. Spanish Dancers and some scorpion fish are found on the sandy area and the coral outcrops attract a lot of animals as well. Apart from the sleeping Angelfish there are also Lobsters and Cleaner Shrimps.

Drop Off offers a mix of sandy slope and wall. The slope and wall are covered with filter feeders like Feather Stars, Brittle Stars and Basket Stars and there are always crabs and shrimps crawling among them. There is an abundance of Anemone fish, and Octopus and Cuttlefish are also often seen here.
Night dives are also excellent in Drop Off. Spanish Dancers, Lionfish and other predators are seen at night.

Bias Tugel lies south of Padang Bai. This is a steep slope nicely covered with corals and sponges. Look on the outside of the large barrel sponges for Wally's squat lobster (Lauriea siagiani) and on the Muricella gorgonians for Pygmy seahorses.

This site comprises three rocks that sit just off the coast. The dive site is a steep sloping wall covered with hard and soft corals. There is abundant fish-life with schools of Blue Lined Snapper, Unicorn fish, and Butterfly fish. Moray Eels are commonly found and White-tip reef Sharks are usually in residence. The site also offers an excellent macro life.
Mola-Mola (Oceanic Sunfish) can be sighted here in cold water conditions that occur in August-September.

There is a blowhole on this rocky outcrop which spouts jets of water, so Biaha looks like a large whale! This dive site is not for beginners. The inside area of the crescent (the east side of Biaha) has a cave large enough for several divers to enter (4 to 5 m high). In the cave there are nearly always several White-tip Reef Sharks. Nudibranch are found among the corals on the wall.
Mola-Mola (Oceanic Sunfish) can be sighted here in cold water conditions that occur in August-September.

The dive site is a steeply sloping wall along the north and east faces of the island. There are several caves at depths of 15-30m in which sharks are occasionally found. Gili Tepekong has excellent coral cover with extensive stands of stag horn coral (acropora) and massive bommies as well as soft corals. Angelfish, Moorish Idols and Butterfly fish are commonly sighted. A more demanding dive is to be had in the Canyon at the southwest side of the island. This site is notorious for its unpredictable currents and requires perfect timing and knowledge of tide tables to do safely. The canyon itself is a steep split in the south side of a submarine reef extending out from Tepekong. The reef slopes down steeply from 9m to 25m, where the lip of the canyon begins.

The canyon drops down to the floor at a depth of 32m.The floor is strewn with massive blocks of rock with many outcrops and pinnacles covered in hard coral.
The currents here attract schools of feeding fish with huge aggregations of Sweetlips, Snapper, and Surgeonfish. There are always masses of Fusiliers and ever present predators such as Trevally, Groupers and the occasional White-tip Reef Shark. The site is rich in Anthias, Basslets and Lionfish. Usually there are strong currents, so this site is for experienced divers only and conditions have to be right to dive here. Mola-Mola (Oceanic Sunfish) can be sighted here in cold water conditions that occur in August-September.

Tulamben, which is around 1.5 hours from Candidasa and is famous for the Liberty Wreck dive site. There are also many other sites close to the shipwreck.

The premier dive site of North Bali is the Liberty wreck found only 30m off-shore. During WWII the ship was torpedoed and beached, and in 1963 spectacularly slid into the ocean during the eruption of Mt Agung. It is SE Asia's most dived wreck.

Approximately 120m long, the wreck is close to shore and easily reached from the beach. The hull is badly broken up, with the stern at 5m and the bow pointing towards the deep at 28m. While the wreck is not whole, it is so large that parts of the hold are intact and accessible. There are swim-throughs, overhangs, and portholes which give the sensation of being inside a sunken wreck.

While the hull is completely encrusted in hard and soft coral, many features such as the bow gun are still recognizable.
Owing to the thousands of divers who have visited the wreck, the large schools of unicorn fish and parrotfish are habituated to divers and even large specimens approach very close. A humpback wrasse is regularly sighted in the early morning, and a resident school of jacks is often swirling in the hold.

Drop Off is a mix of sandy slope and wall. The site offers excellent muck diving and the sandy slope bottom is timing with all kinds of critters. The wall is beautifully covered with corals, sponges and gorgonians. The fish life equally impressive as on the Liberty Wreck and usually there is many different Angelfishes, Groupers and Wrasses.

Coral Garden is a great place to do muck diving and find rare animals such as the harlequin and the robust ghost pipefish, several species of eels and even the mimic octopus and boxer crabs. On a good day there might also be an eagle ray or a couple black tip reef sharks, a big barracuda or Spanish mackerel! During the rainy season the river might bring a lot of sediment, so diving there is not as good. This dive site is excellent for night dives.

After a short boat trip with a Jukung you reach this dive site southeast of Tulamben beach. Batu Kelebit dive is on a white sandy bottom with big pinnacles and a spectacular underwater plateau. On the slope there are beautiful hard and soft corals with sandy areas in between. Large pelagic fish such as tuna, shark, barracudas are sometimes seen here. Visibility is usually quite good.

Seraya Secret lies a short distance south of Tulamben. This dive is right off the beach in front of the Scuba Seraya resort. The dive starts on a black sand slope sparsely covered with sponges, small corals and white hydroids. There are numerous species of nudibranch to be found as well as the thorny and the common seahorse. There are several ridges, some covered more densely than others, lying to the right side of the Bio Rock structure (a project to grow corals). At the bottom of these, at 17metres, is a cleaning station which is covered with hingeback shrimps. A moray eel is a permanent resident here. The highlight of this dive is a pair of Harlequin shrimps who live under a small coral block. These rare shrimps with their large flat claws display intense colors of white, pink, blue and yellow. They feed on the blue Starfish that live in great numbers on this site. There are also frogfish and ghost pipefish in residence.

Nusa Penida and Nusa Lembongan are islands around 30 minutes by boat from Candidasa. Many divers and snorkelers visit these islands for the chance to see manta rays as well as reef sharks and nudibranchs.

Dive sites are steep slopes covered with low growing corals and sponges. There are nearly always currents that sometimes change directions in all these dive sites - here the currents coming from the north hit the coast head on and divide, some water flowing west, some to the east side of the island. The chances are, that you will see large pelagic fish such as White-tip Shark and Black-tip Shark, Tuna, Barracuda, Giant Trevally as well as macro critters such as Orangutan Crabs. Mola-Mola (Oceanic Sunfish) can be sighted here in cold water conditions that occur in August-September.

The dive site is primarily a steeply sloping reef face. There is good hard coral cover and a surprising array of soft corals. The attraction here is the abundance of fish life with swarming schools of fish to be found. Butterfly fish, Angel fish, Surgeon fish, etc.
Mola-Mola (Oceanic Sunfish) can be sighted here in cold water conditions that occur in August-September.

Crystal Bay consists of a large sandy area at the top with a huge mushroom coral block with a large school of glassfish underneath. Then a large field of stag horn corals and a steep slope with sponges and whip corals. Crystal Bay is part of Ceningan Channel, so there is a strong current and it is quite cold.
In August and September Mola Mola (Oceanic sunfish) are here and Crystal bay is properly one of the best dive sites for Mola Mola's.These gentle giants are just amazing, so huge but moving gently with their oversized fins, holding their heads upwards, so the Banner fish can have a go at ridding them of their parasites.

The big highlight at Manta Point is, of course, the graceful Manta Rays, who come here and gather around the shallow cleaning stations. There is an abundance of Blue Spotted Rays and among the short vegetation there is lots of Nudibranch. Conditions on the southwest coast of Nusa Penida are unpredictable - it can be quite rough with high waves, so this dive site can not always be reached.

Blue Corner is a slope with overhangs, outcroppings and a wide canyon. Dives here must be planned according to the tide tables. However, despite diving at the best of times, the current is still often very strong. As you drift along the reef you have a good chance of seeing Marble Rays, sharks, Eagle Rays and perhaps Mola Mola (Oceanic Sunfish).

Jangka Point is a large mangrove forest lying between Lembongan and Ceningan Islands. This is a drift dive on a slope covered with huge sponges. Sharks, Turtles, Tunas are commonly sighted as well as many fish such as Anthias, Trigger fish, large Angelfish and Sweetlips. Some species of Groupers can also be seen here.

Lotus Bungalows will do everything possible to ensure your stay is enjoyable and memorable.
We understand that the little touches matter.